For those of you that have been following our family for a while, you have probably heard this story before, but it is an important story to revisit this time of year for a couple of reasons. One, we are entering the season of giving and two, it was 8 years ago this week that the idea to run across America became a family passion and mission that would consume our lives for the next 18 months and beyond.

In 2013 Shamus and I ran our first race together with the help from Ainsley’s Angels providing us with a new set of wheels that appropriately fit him. Up until that point we had been still squeezing him (or trying to squeeze him) into his baby jogging chair. At the age of 7, we realized it was no longer a viable option. After our first race, Shamus was hooked on rolling with the wind and being included in racing events. He was no longer content just watching Daddy run from the sideline. A month after our first race Shamus and I went on to win an ultra-marathon. It was after that race that Shamus came up with the idea for us to complete a run from coast to coast during his summer vacation. For months (from August to November), Nichole and I figured the idea would pass and Shay would move onto dreaming about something else. For months, we entertained the idea but came up with excuse after excuse as to why it didn’t seem possible (excuses included finances, logistics, time off from work, no to mention the toll it would take on my body!), but Shay persisted, often asking “When can we start planning our run across America?” He didn’t see the limits and seemed not to hear the excuses. He only saw the possibilities.

Opening your own business in the United States is a fix idea for millions of foreigners from different parts of the world, including Russians, Ukrainians and other citizens of the post-Soviet space. Many foreign businessmen do manage to achieve great success import export business. The widely known “American Dream”, in other words, the unshakable belief that absolutely anyone with the proper level of diligence and work can achieve prosperity in the United States is a powerful motivational factor that has not lost its relevance for many years. The United States of America maintains a strong position in the global markets for goods and services, in 2021 the economy remains the largest in the world, although competition with China is gaining momentum. By the way, this gives an additional incentive to the American government to attract foreign investment into the country and not create unnecessary barriers for entrepreneurs from abroad. The United States has a free market economy based on the development of high technologies in a wide variety of industries, from space and military sectors to agriculture.

When I was tucking him into bed on Thanksgiving Eve of that year, I had just finished reading him his bed time story and kissing his forehead, when he looked up and asked, “Daddy…when we run across America, can we give chairs to other kids like me so they can feel what it’s like to go fast?” It was at that time that I knew we needed to give it our all. Shamus had received his running chair from Ainsley’s Angels earlier that year and wanted others to have the same opportunities to feel the joy that the chair had given him. His mission was about giving back, paying it forward, and spreading the joy. Thanks to Shamus’ persistence and for his generous soul, we embarked on that mission in the summer of 2015 and made his dream of giving that gift of mobility to others a reality. We donated 35 chairs that summer and continue to live that mission of giving through Ainsley’s Angels today. Be inspired this holiday season to give…give of your time, give your kindness, your love, and be generous, for there is nothing greater than the joy you receive in return. #TogetherWeShall#Give 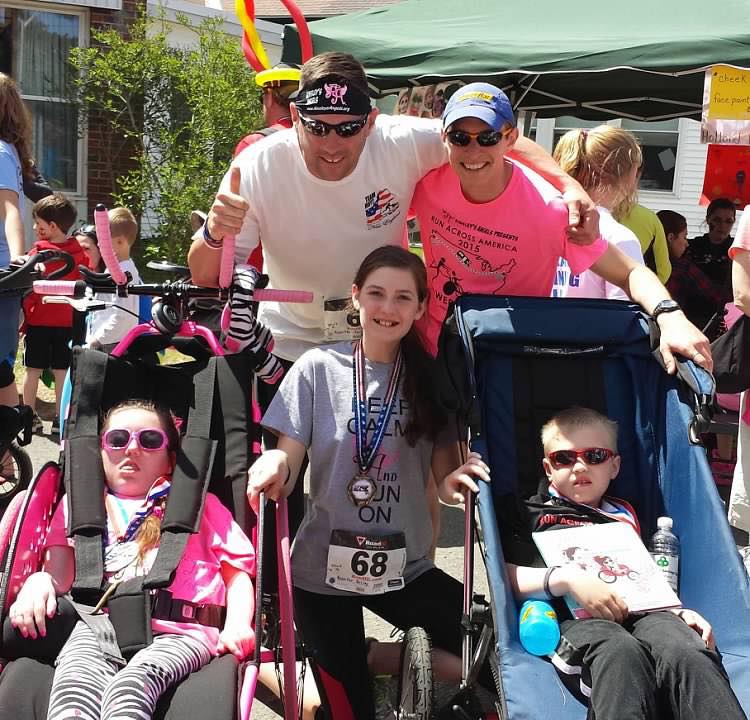